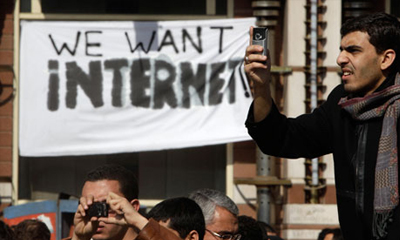 EGYPT The First Cyber Revolution : The Full True Story on How Egypt Shutdown the Internet for 5 whole days

No one, not even Mark Zuckerberg the founder of Facebook, nor Jack Dorsey the founder of Twitter had imagined that one day their websites will help in a country’s revolution, take down a president or change a regime.

Egypt’s well educated youth, whose sole dream is to see Egypt a better country, lead peaceful demonstrations on the 25th of January 2011, which is the National Police Day, against injustice and freedom suppression. On the 11th of February 2011, Hosny Mubarak finally declared his resignation as the President of the Arab Republic of Egypt. Just to give you a few examples of people who joined the revolution: Wael Ghoneim (EMEA Marketing Manager of Google) who was arrested by the police on the third day of demonstrations; Dr. Ahmed Zewail (Egyptian Nobel Prize Winner in Chemistry), Dr. Mohamed ElBaradei (former Director General of the International Atomic Energy Agency), and many Egyptian celebrities.

What is unique about this revolution?

It will be recorded in history that Egypt’s revolution was the first Cyber revolution in the World. On the first three days, protesters used their smart phones, Blackberries or iPhones to guide the demonstrations. It all started with Facebook. Then Twitter played a very crucial role in guiding demonstrators through the streets, to regroup themselves after being distracted by security agents either by water, tear gas or real bullets.

By the end of the first day of the revolution, Tuesday 25th of January, Egyptian Intelligence banned the access of Twitter from inside Egypt. They also banned some online opposition newspapers like El-Dostor. But that didn’t stop Egyptians from accessing Twitter and those websites using different proxies and in few minutes a series of proxies and ways to get around
the ban were shared among Egyptians.

The Egyptian hackers quickly reacted to those actions by attacking the website of El-Ahram (one of the main Egyptian Government newspapers) and that of the Ministry of Interior Affairs using DDOS (Distributed Denial of Service Attacks).

We won’t continue talking about the revolution and its political development, you can get back to the news for more information. We will now concentrate about the technical part and our view regarding what happened later, with respect to cutting all means of communications across Egypt.

By the second day, Wednesday 26th of January, Facebook usage was blocked in some areas, especially in El-Tahrir Square (Liberty Square) where most protesters gathered. Facebook was totally banned on the third day (Thursday 27th of January) of the protests. During those three days, the situation was a real war between the Government and the protesters; on the streets and on the web.

On Friday 28th of January, in the early morning – Friday is the weekend in most Islamic countries – the following communication services were down: All mobile phone communications (voice calls, mobile internet, SMS, etc.) i.e. Egypt’s three operators were down completely with all their services All internet connections by all providers (ADSL, dial-up, etc) To summarize the situation, all means of communication were down, except land line phones.

How was the Internet cut?

In order To know how the Internet was cut in Egypt, we first need to know the physical hierarchy of Internet in Egypt. We will try to simplify the details as much as possible so that readers with no telecommunication background grasp how it works easily.

Different countries are connected together using a network of optical fibers, with very high bandwidth, in seas and oceans. Check figure 1. 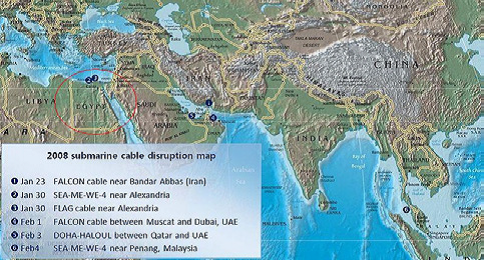 The bandwidth of international lines is sold to ISPs and companies as requested, and then distributed across Egypt using Telecom Egypt cables, which are the only cables available! This is done through what is known as POP. The bandwidth is then distributed to the home end-users or companies. Check figure 2 for the Internet hierarchy in Egypt. 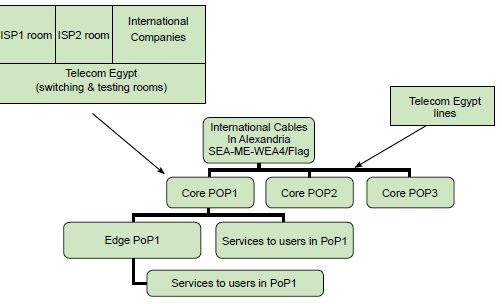 Therefore, in order to cut the Internet across Egypt you have more than one option:

● Egyptian Government can disconnect all the lines from the source (here the landing point of international cables is Alexandria). But this will disconnect all the lines connecting Egypt to the outside world and that was not the case; only  88% of the Internet usage in Egypt was down and nearly12 % was still working. So this option was not likely to have been used

● Authorities can intimidate the ISPs to shut down the services to users. This was clearly published by Vodafone, that some Egyptian security agencies ordered them to shutdown all mobile services. Shutting down the Internet from the ISP’s side can be made by many different ways according to every ISP’s Network Design, but the easiest way is to withdraw their Border Gateway Protocol routes (BGP protocol is a protocol used by border  routers to transfer information between different autonomous systems), and most probably this is what happened with most ISPs

● If the ISP refused to cut the service (like in NOUR CASE), the Government can  cut the service by itself through Telecom Egypt POPs but in Nour Case which is not a residential Provider and most of its customers are big companies, Egypt security agencies accepted or agreed not to cut the internet on Nour Customers, but that made TEdata and Linkdot net, the biggest service providers in Egypt, complained that Nour is still working and that may affect their business , that’s why Nour was also down on Monday by Telecom Egypt not by Nour Engineers.So Nour was down for a business reason not for a security reason.

Why were the Internet and mobile communication cut?

What happened by the end of Friday explains why Egyptian Intelligence cut all communications in the country. This day was named: Friday of anger, where millions of people went out in the streets and the highest number of dead people was reported on this day as well.

Narusinsight can monitor users’ traffic, including recollecting their mails, chats and other data. Built on the NarusInsight Traffic Intelligence System, the NarusInsight Solution for Intercept passively monitors multiple links on the network. It monitors each packet on the network link and analyzes it against a target list input by the providers or directly by a law enforcement agent. If the packet matches the target criteria, it is captured for formatting and delivery to storage, law enforcement or directly to optional content rendering and analysis tools.

Egyptian Intelligence or National Security knew that a lot of people will gather on this Friday, and they knew in the last 3 days how they collect themselves using Twitter, Facebook and SMS services. And maybe they also knew more than that! Whatever they knew, the decision was taken to cut all communications including all the Internet and mobile facilities.
But unfortunately this was the most stupid decision, because people who were at home, waiting for brothers, sisters, relatives and friends to come back, couldn’t communicate with them. They  couldn’t call their friends, couldn’t connect to the Internet to know their latest activities on social media, and couldn’t even send a single SMS! So, more people went out  in the streets, maybe not to protest but to merely show their anger at this decision.

Was the Internet 100% cut across Egypt?

The answer is NO, according to most statistics nearly 88% of the Internet connection was down. What about the rest 12%. Well, we have different cases,

All international MPLS Lines were working fine, so companies who had MPLS Lines through any provider were working in the whole 5 days . One of the solutions was to use the international land line to dial up an external service provider in France or any country using a dial up modem, but this costs a lot of much of course

Another solution was to have a satellite connection, this way you won’t pass by Telecom Egypt lines but again this solution is so expensive and still not  reliable for huge companies but it is better than nothing

This story gave us some facts that don’t exist only in Egypt but in most countries that use the Internet: Internet traffic is monitored, especially social media networks and this can be checked in the customers part of www.narus.com where you will find nearly 1/3 of their customers are countries governments

Today, social media networks are not used only for connecting with friends or making business marketing, but they can be used in issues affecting whole countries; revolutions, wars, etc. This story also gave us some questions, for which we hope to find answers: On which level do governments have the right to control essential life facilities, like communications, electricity and others, to civilians even in cases of emergency?

Will you support a law, if it doesn’t exist in your country, that considers the Internet and telecommunication systems as main human needs like electricity supply, water supply and others, which can’t be cut with such a way?!

Finally Egypt’s story was a real proof that Internet in general and social media networks in specific can really change the world. Virtual life can cause revolutions, wars, crimes and more. Egypt started the revolution on the virtual network and transferred it to a real story, a real TRUE STORY.