Neurevt bot “Beta Bot” has a lot of functionalities along with an extendable and flexible infrastructure. Upon installation, the bot injects itself into almost all user processes to take over the whole system. Moreover, it utilizes a mechanism that makes use of Windows messages and the registry to coordinate those injected codes. The bot communicates with its C&C server through HTTP requests. Different parts of the communication data are encrypted (mostly with RC4). Many components cover a large number of the most popular malicious functionalities, including downloading malware, DDoS attacks, and credentials stealing.

The following snippets found during this phase show some capabilities for real “Beta bot” for sale:

1] Malware sets the below registry “ShowSuperHidden” to zero (default=1) to hide with protected operating system files:

2] Betabot creates winlogon0 folder and copies itself with random named under the following paths:

First path will be used by malware for persistence as shown by autorun tool output .

 Process wuauclt.exe was started by “[random name].exe” and tries to connect to the malicious domain 7obby.com

4] By exploring memory of running processes with “RWX” protection, it has been observed that malware copied itself to the same memory area “0x7ff20000 0x7ffa2000” for many processes to keep persistence except explorer.exe infected memory area “0x7ff10000-0x7ff92000. 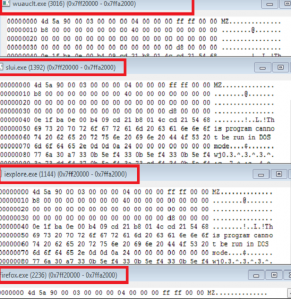 svchost.exe process tries to resolve the following domains but it could not find such names

7] Configuration Extraction: The configuration section of the bot, this section is encrypted inside the bot and decrypted while the bot is running could be extracted using betabot-re script published at this link https://github.com/KenMacD/betabot-re 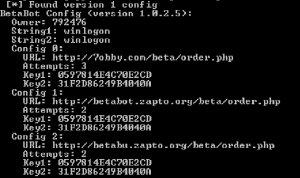 The output shows Betabot version=1.0.2.5, owner is as shown “792476” primary malicious domain “7obby.com” and its backup domain betabot.zapto.org and betabu.zapto.org and keys used for encryption.

The following shows some of the malware capabilities:

RtlQueryElevationFlags: A pointer to a variable that receives the elevation state 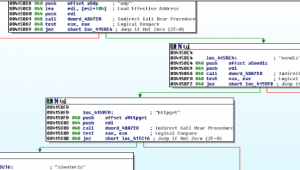  Skype Spam:
Neurevt tries to access Skype via SendInput API like “tSkMainFom” and “TZapCommunicator” and send message to contacts :

 Think, before you click! Read the prompts your system shows you and do not click “Yes” or “OK” thoughtlessly. In case of doubt, ask someone for help or try to search the Internet for more information about the prompt in question.

 An up-to-date comprehensive security solution with a malware scanner, firewall, web and real-time protection is an absolute must. A spam filter that protects you from unwanted spam emails also makes sense.

 The installed operating system, browser and its components as well as the security solution installed should always be kept up-to-date. Program updates should be installed as soon as possible to close existing security vulnerabilities.

In addition to these recommendations, more details exist at the following link: https://blog.gdatasoftware.com/blog/article/a-new-bot-on-the-market-beta-bot.html

To detect and remove this threat and other malicious software that may be installed on your computer, run a full-system scan with an appropriate, up-to-date, security solution.